Surviving hedges (and hedge traces) have been dated by reference to old maps and archival documents, and by use of the Pollard & Hooper technique (see below).
In a Greater London context, because of the rarity of surviving pre-19th century agricultural landscapes, all these hedges except those planted by London County Council since c.1903 are of high to outstanding heritage importance.

Some of the oldest field boundaries could, as noted in the historical introduction, be survivors from prehistoric times; until Avery Hill was ‘gentrified’ in the 19th century and the landscape modified for ‘picturesqueness’ there would have been little reason, other than when enlarging fields by removing hedges, for farmers to change the old pattern. 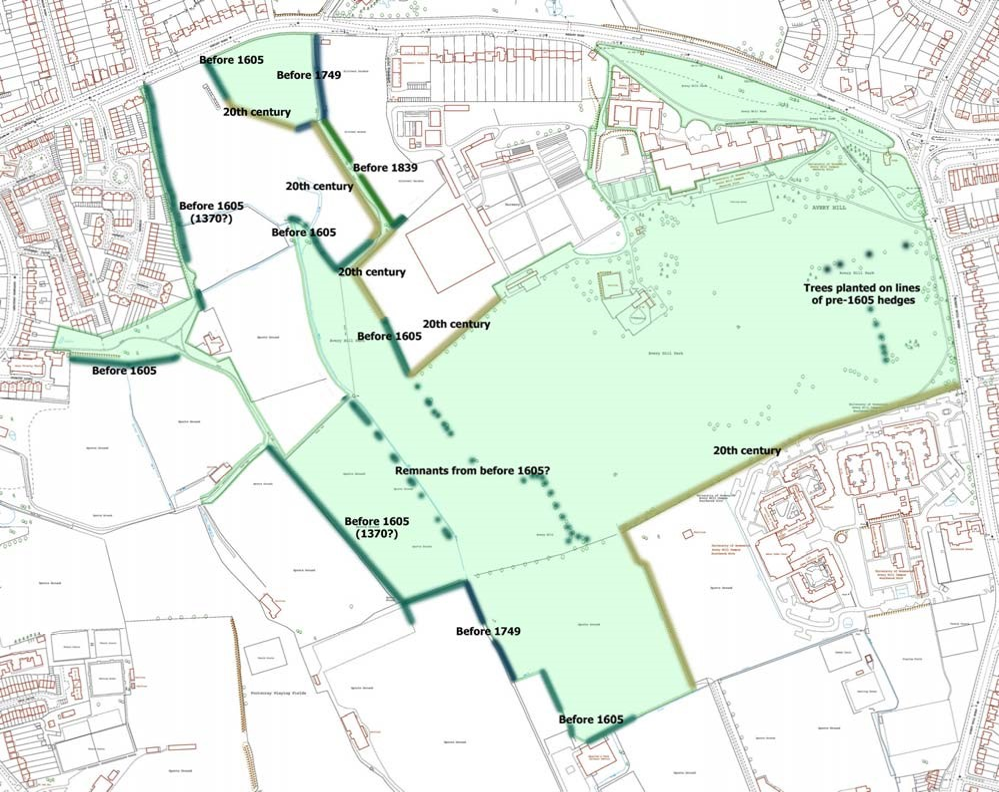 Hedges and fields in the historic past

A series of maps has been created to show the first appearance (thus the minimum age) and subsequent fortunes of the
field boundaries in the Park. The original maps on which the work was based were hand-drawn by local surveyors or
clerks, to show the ownerships (usually by leasehold) for legal and taxation purposes; they were not necessarily
surveyed accurately. This gives several problems of interpretation:
•  Field boundaries appear to move between one map and the next, although the general disposition (and
names) of fields is continuous. Are these changes genuine? For dating purposes, we have assumed that the
boundaries stayed more or less the same (no purpose would be served in grubbing out one hedge to plant
another a few metres away) and that inaccurate surveying is to blame.
•  Field corners tend to be rounded-off, and bends in hedge-lines exaggerated, in the earlier maps. We have
assumed that this is the result of mapping ‘by eye’ or drawing up from memory, although it should be noted that
a) original prehistoric fields cleared from the wildwood would have had rounded outlines and b) early medieval
ploughing left strips and headlands between the cultivated land and the hedges, thus tending to perpetuate
rounded field margins.
•  There is some distortion in the old maps compared with the modern accurate projection. This makes the
placing of old boundaries onto the modern map problematic where there are no surviving traces for guidance.


These reservations should be taken into account when comparing the historic maps.

The method used in the Study is that developed by Max Hooper (Hooper, M 1970 Dating hedges Area Vol. 2 no.4, 63-65) and later confirmed, with modifications, by others. By counting tree and shrub species in a large sample of hedges whose age was known independently (from records, maps, etc.), Hooper devised a formula for establishing the age of an otherwise undatable hedge. In any 30 yard stretch of hedge:
Hedge age in years = (99 x the no. of species) – 16
So a hedge with five indicator species would be (99 x 5) = 495 ( –16 ) = 479 years
Rackam (Trees and Woodland in the British landscape, Dent, 1976) confirmed the list of species that were reliable
indicators:
NB Undershrubs (e.g. bramble, ivy) do not count
Rackam’s list is for the whole of Britain. Avery Hill Park’s history, location and geology mean that its hedges include only the following (other than by 20th century ornamental planting):